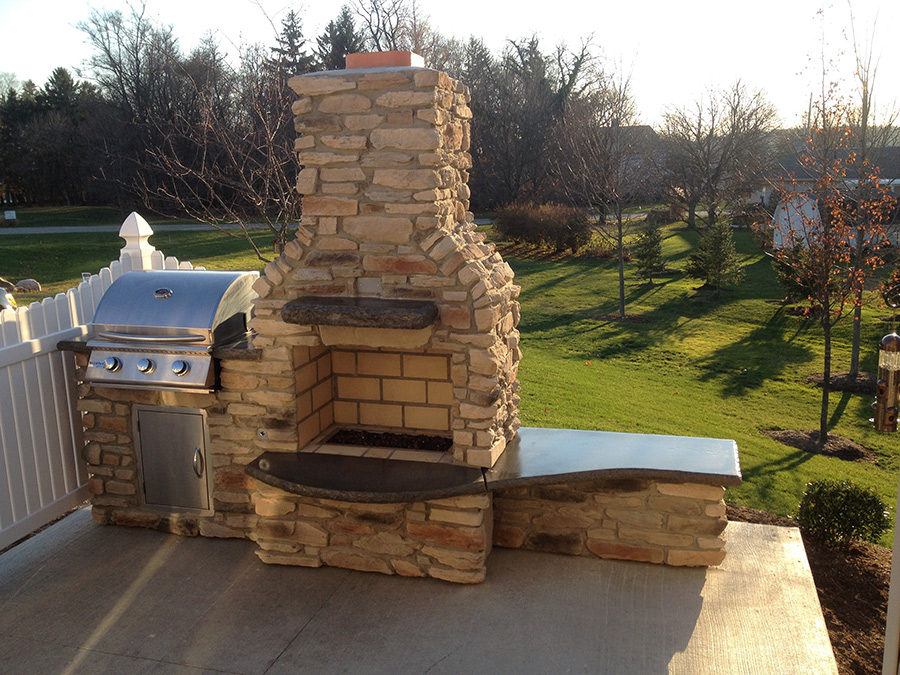 A lot of customers ask about the correct height for their brick oven chimney. Round Grove Products keeps nominal height at 108” or lower in order to ship nationwide without requiring an Over Size Load permit, but most sites require a chimney extension above 108” to create the proper airflow.

I recommend walking through the site with the homeowner and educating your client about issues that influence airflow and chimney draw. The first thing I relate to clients is that every firebox will smoke until the chimney flue heats up. It is a fair expectation that exterior finishes above the firebox will exhibit some creosote build-up after the first fire. I recommend following your finishing manufacturers guidelines to address cleaning of any creosote buildup.

Next, I recommend keeping the chimney opening at least 24” taller than any other structure within a 10’ radius. That guideline has been fairly consistent since 1978 although some municipalities have more stringent building codes.

Second, I look for obstructions to air flow such as tall fences or hedges, nearby structures (especially two-story homes), and tree canopy that might require a taller chimney outlet.

There are some design issues that encourage up pressure–getting the pressure at the top of the chimney to be lower than the firebox. The Brick Association Technical Notes 19 on Residential Fireplace Design, January 1993 is an excellent reference resource.

First, as a general rule of thumb, the flue size should be at least 10% of the firebox opening size. The bigger the firebox opening, the higher the probability for down pressure. Round Grove uses a 12” x 12″ clay flue liner that meets the criteria for fireboxes up to 48″x24″.

Second, keep the chimney and firebox openings separated as much as possible to allow area for different air pressure zones. Fire requires a great deal of air to burn, so as air rushes into the firebox to fuel the fire it should not be drawing air away from the chimney. The taller the chimney, the better the draw.

In one instance, a tall bluff behind a customer’s property created a significant downdraft that pushed smoke right back down the chimney and out the front of the firebox. We took the chimney up eight-feet above the roof, however, smoke exiting the chimney immediately flowed down to ground level even with the taller chimney. Ultimately, the customer had to install a chimney cap fan to overcome the limitations presented by their site.

So, how can designers and contractors anticipate or recognize a site’s potential for draw issues?

Consider extension size using these guidelines before ordering your fireplace. Most sites require a chimney extension to create the proper airflow. Round Grove can build any size chimney extension necessary to address most issues that influence chimney draw.